Memorable Movie Scenes That Made Us Hungry

Let’s be honest, when the camera pans over dripping chocolate or zooms in on a fresh, home-cooked meal, it’s hard not to get hungry while watching a movie. It’s even harder to keep your stomach from growling when a movie intentionally makes all of its meals delicious. But what are the most memorable movie scenes that will make you hungry?

From sizzling casseroles to hot pies straight from the oven, many films are guilty of making us crave everything they show us on screen. Think of all the times movie characters tell us how good their food is, when a kitchen montage zooms in on perfectly cooked confections, or the times when dining room tables were filled with the most exquisite meals. you can imagine.

Well, we’ve rounded up the best picks in these delicious times for your foodie convenience. But beware, this list will make you hungry. So make sure you have a meal or snack on hand before digging into our top picks. If you’re not sure what kind of food would go best with our guide, you can download Doordash’s delivery app and browse a range of culinary treats. here.

Now, without further ado, it’s time to grab the cutlery and get your napkins ready – here’s our list of the most memorable movie scenes that left us hungry.

What movie scenes made us hungry?

Studio Ghibli is the king of animated food. However, while many of the studio’s animated films have left our mouths watering over the years, Howl’s Moving Castle manages to stand out from the pack when it comes to making us hungry.

It’s a well-known fact that breakfast is the best meal of the day, so seeing perfectly drawn eggs and bacon simmering in a frying pan is a surefire way to make your stomach rumble.

The film shows Sophie and Howl placing pieces of fatty bacon in a bubbling oil bath. We see the two continue to crack eggs into the pan, which is heated by an adorable magical fire. With a gentle hiss, raw yolks turn into shiny fried eggs, and the perfect breakfast is complete. 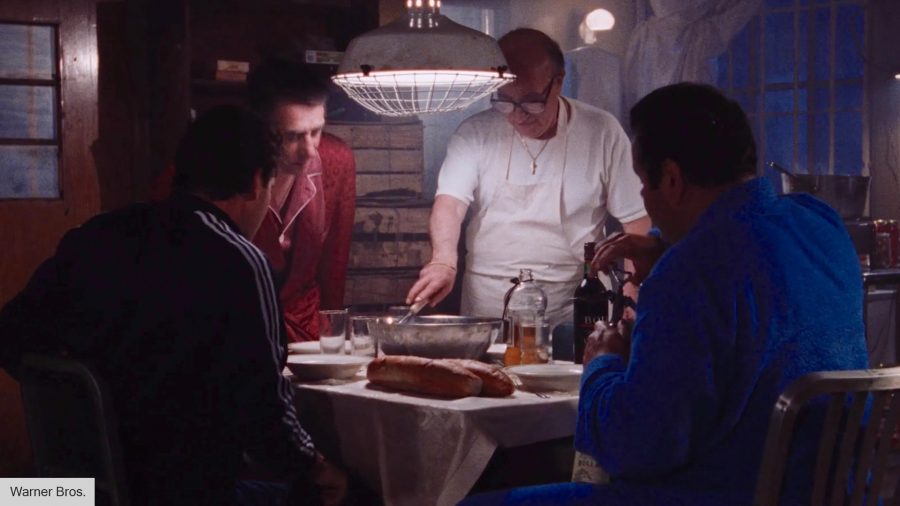 Prison food doesn’t seem so bad if you’re part of the mafia. In this scene from Martin Scorsese’s gangster flick, we see the convicts enjoying a homemade Italian feast while locked in the joint.

Through their connections and a few bribes, they can smuggle the best ingredients into their cells – we’re talking prosciutto, lobster, fresh bread and salami. If you want quality food, it’s all here.

A standout moment in the food film is seeing the men cooking their ingredients. Johnny Dio is frying a thick slice of steak and the men are making Vinnie’s tomato sauce which is complete with veal and meatballs.

We also see Paulie chopping garlic with a razor blade, cutting pieces so thin they practically turn to butter when they reach the heat. With food like this waiting for them, it’s no wonder the men of Goodfellas continue their crime spree. 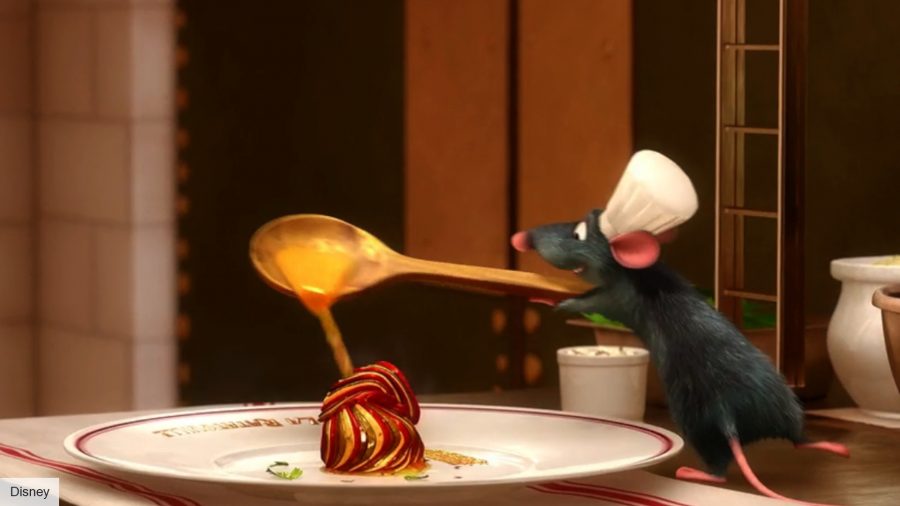 Who would have thought that an animated rat could cook food that looks so good? Most of the food in this Pixar movie about an aspiring rodent chef looks pretty appetizing, but the scene at the end of the movie really leaves your mouth watering. After sampling the elegantly prepared plate of ratatouille, we see film antagonist Anton Ego having an epiphany of flavor.

After his first bite of the delicious food, he experiences a flashback of being home with his mother, then proceeds to gobble down the rest of Remi’s ratatouille. Watching this scene will remind you of the comfort that food brings, make you crave a hot, home-cooked meal, and make you want to try a good meal. 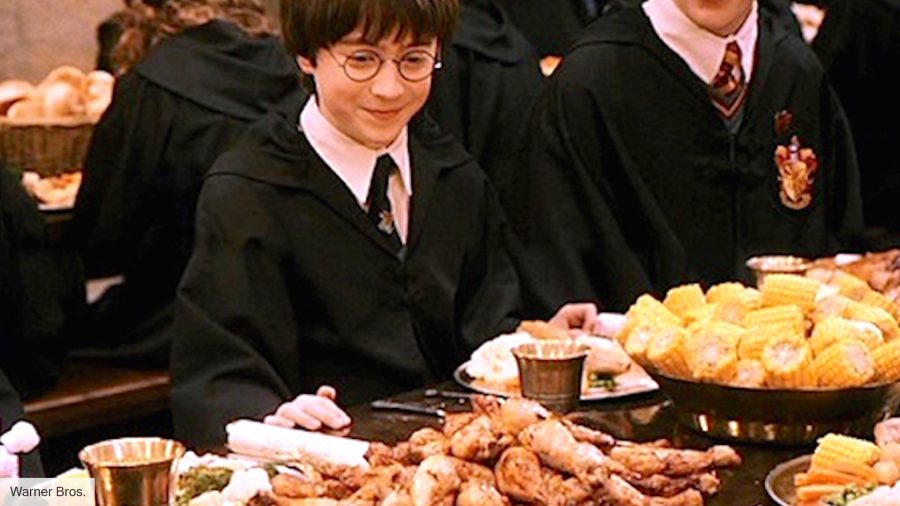 Magic isn’t the only thing that wows in the wizarding world of Harry Potter. Turns out Hogwarts knows how to stage a spread. In the first fantasy film in the magical franchise, we see Hogwarts headmaster Dumbledore say “let the party begin”, and suddenly a huge table of tasty food appears in front of the students.

From corn on the cob to golden chicken thighs, everything in front of the young wizards and witches looks cooked to perfection. The actors in the films seem to agree with this statement. The camera continually zooms in on happy faces, digging into their meals – particularly Ron Weasley, who decides to eat two chicken drumsticks at once. 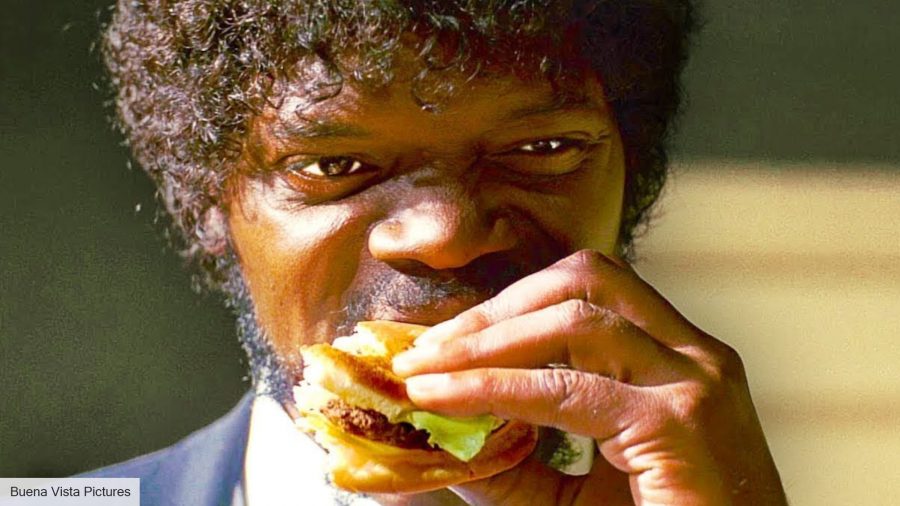 Words can paint a picture, and sometimes a monologue can make your stomach growl. Samuel L. Jackson’s fast food-centric speech in the thriller Pulp Fiction will leave you craving a greasy burger and itching for a nice cold soda to wash it all down.

In Quentin Tarantino’s film, we see the scene where two hitmen (Jackson and John Travolta) make a surprise visit to a house “to do business”. However, they are turned away after Jackson spots burgers on the dining table.

He is told that the burger in front of him is called the “Big Kahuna Burger”, then he describes how tasty the food is and why burgers are just awesome in general.

As we see Jackson dig into the juicy Big Kahuna and hear the actor repeatedly say “that’s a tasty burger,” it’s impossible not to want to try it yourself. 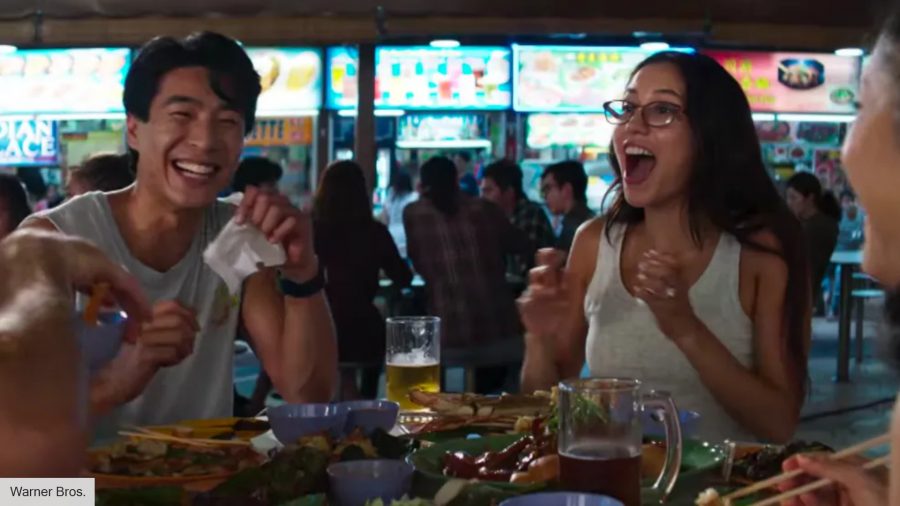 There’s something special about being surrounded by friends and engulfed in the glorious spectacle that is street food. In the romantic comedy Crazy Rich Asians, Rachel (Constance Wu) and Young (Henry Golding) explore Singapore’s food stalls. The flames soar high, the spices are tossed over the fresh shrimp, and the golden batter is perfectly fried.

As if that weren’t enough, Young tells Rachel that the vendors have been perfecting their dishes for years and “even earning Michelin stars” for all the tasty creations.

At the end of the scene, a table is filled with colorful and downright delicious food that you can practically smell behind your screen. Whenever you watch this movie, be prepared because you will have a severe case of food cravings. 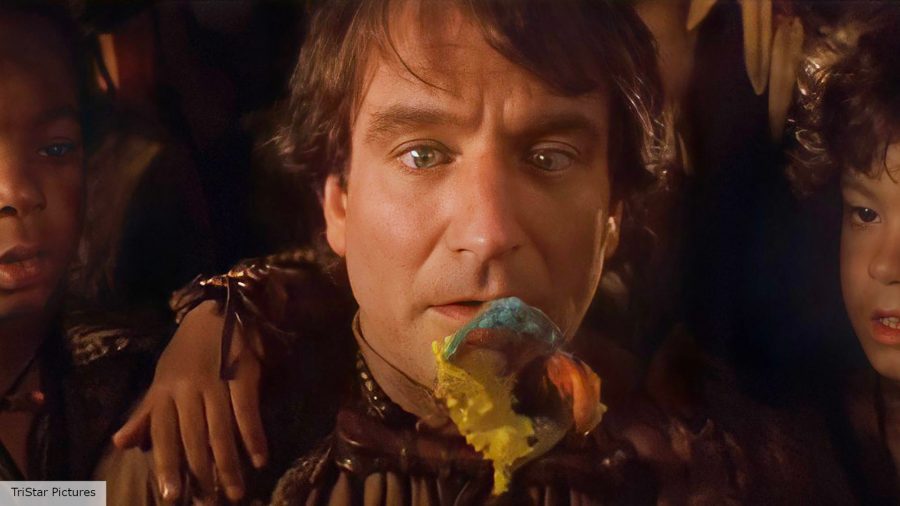 Wouldn’t it be great if you could just imagine a table full of goodies whenever you got a little peckish? In the movie Hook, a table of large dishes is seen suddenly appearing in front of a very surprised Peter Pan, played by Robin Williams, after imagining his meal. Magic food seems straight out of a fairy tale.

From colorful desserts to shiny fruit bowls, everything seems too good to be true. After Robin Williams tries a frothy drink and polishes off a giant turkey leg, we see an epic food fight explode, with colorful pies flying through the air. I mean, what good is an imaginary banquet if you can’t have a little fun planning your dinner party, right? 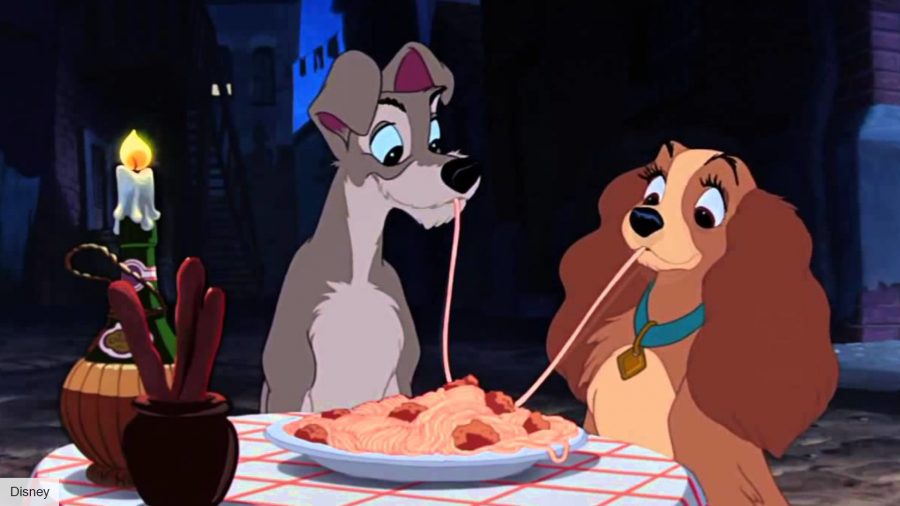 No one does pasta quite like bustling Italian restaurant Tony’s. In the Disney movie, we see two dogs go on a cute date where they get a serving of “the best spaghetti in town.”

The food looks stellar, and the rapid sounds as the characters eat the thin noodles are oddly satisfying. Everything in this movie scene captures the experience of eating quality, saucy pasta.

It’s also one of the most atmospheric dinner scenes you’ll find. From the two dogs who accidentally kiss with spaghetti, who sacrifice meatballs for each other, and the chef who sings the impassioned song Bella Notte, this culinary moment will leave you craving romance and likely ordering food at Italian take away. 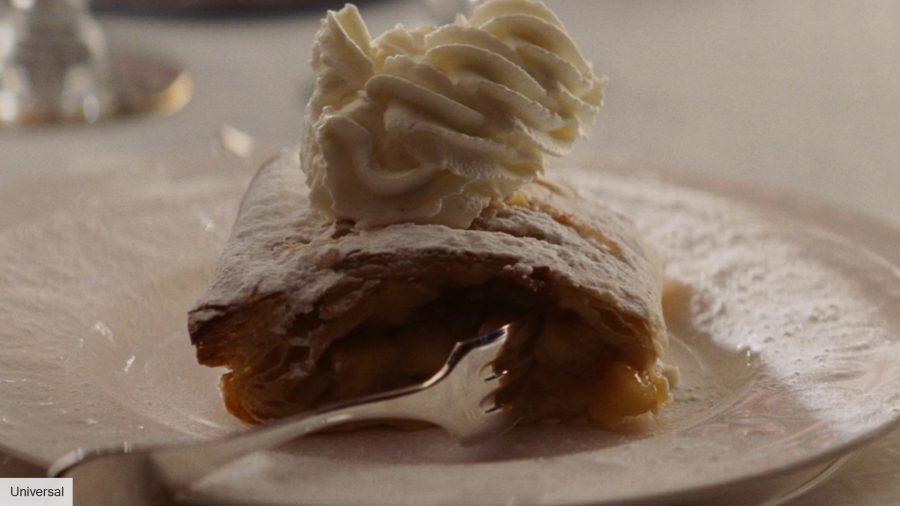 Turns out Tarantino is a foodie, as Inglourious Basterds is the second of his films to make it to our list. Amidst all the murders and explosions, this war movie has one of the best dessert scenes in cinema. We’re talking about when SS officer Hans Landa decides to indulge himself with strudel and cream.

The powdered German pastry looks scrumptious and the camera zooms in on a dollop of fluffy cream being added to the characters’ plates – completing the tasty image. In this movie, we also get a perfect cross-section of the strudel, showing how flaky the dessert is and how caramelized the apples are inside. It’s a shame that only the evil Hans Landa can enjoy such a tasty treat. 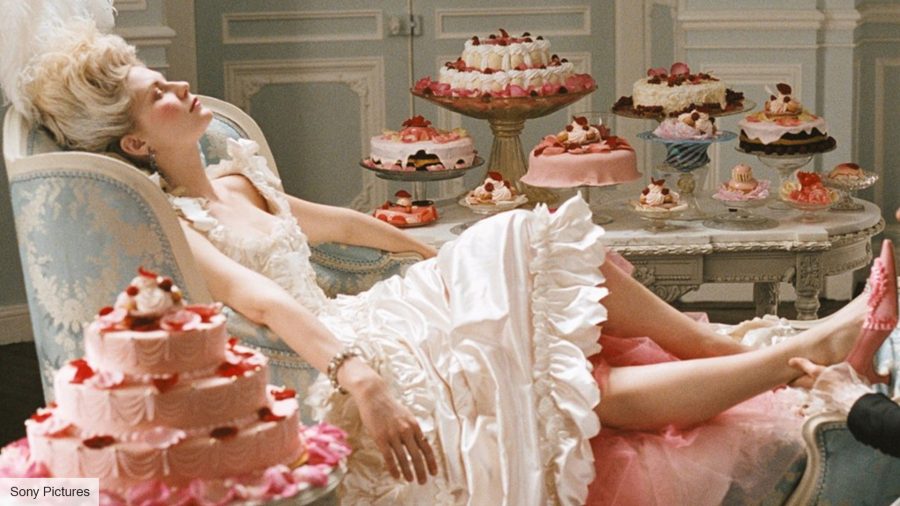 Marie Antoinette says “let them eat cake” and gives us a gourmet montage that will suit you if you have a sweet tooth. As Bow Wow Wow’s rendition of “I Want Candy” plays in the background, we see a series of fancy French confections served on elegant plates to beautiful women as they shop for shoes while sipping champagne . So, in short, it’s pretty much the ultimate sweet fantasy.

There are close-ups of champagne towers, colorful cakes, jewelry, and sweet fruit in this scene. Everything screams decadence. Marie Antoinette reminds us that if you ever have a cheat day on your diet, do everything and spare no expense.

There you have it, the most memorable food scenes in cinema. If those movie moments made you as hungry as they made us, be sure to check out Doordash’s food delivery app for a quick and delicious way to chase away all those cravings and indulge in the best choices. culinary.

If for some reason you’re not in the mood to eat, don’t worry, The Digital Fix has you covered. For more classic movie picks, here’s our guide to the best movies of all time.